These are all of the chapters of the book of Ruth. Clicking on a chapter will show you the text of that chapter of Ruth in the Bible (New International Version). 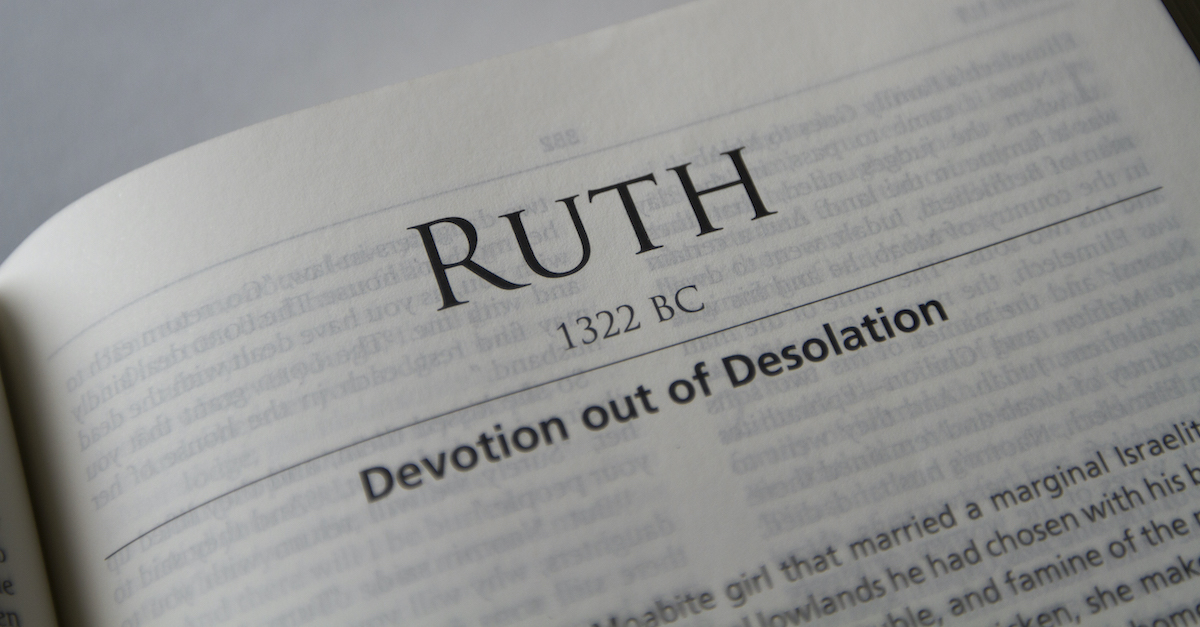 Who Wrote the Book of Ruth?

It is unknown who wrote the Book of Ruth, though many attribute authorship to the prophet Samuel. The book was written for the people of Israel somewhere after the period of Judges (1375-1050 BC).

Ruth was born of a Moab ethnic background. Her husband’s family had come from Bethlehem to Moab due to a famine and intermarried with the local peoples. Through the early events of the book Ruth’s mother-in-law, Naomi, ventures to return to the land of her husband in Judah.

Ruth was the great-grandmother of King David and in the line of ancestry of Jesus Himself. Her story of profound integrity, kindness, and loyalty still stands today in great honor.

Context and Background of Ruth

The Book of Ruth takes place during a dark time in Israel’s history. According to the Life Application Study Bible the people of Israel were living in a period of, “pleasing themselves, not God.” This was also a time after a great famine in Judah, one that caused Naomi’s family to find refuge in Moab.

The story begins with the history and journey of the family of Elimelech and his wife, Naomi along with their two sons to the land of Moab for food. Years pass and the two sons take Moabite wives, something that by tradition in the Jewish faith was not encouraged. According to the Life Application Study Bible, “Marrying a Canaanite (and those living within the borders of the promised land) was against the law set in Deuteronomy 7:1-4. Moabites were not allowed to worship at the tabernacle because they had not let the Israelites pass through their land during the exodus from Egypt. Ironically, it was Ruth, a Moabites, whom God used as an example of genuine spiritual character.” (Life Application Study Bible).

The two sons of Naomi pass away, as does Elimelech, leaving Naomi and her two daughters-in-law widows. Orpah, the widow of the first son returns back to her father’s home, while Ruth feels it her moral duty to uphold the commitment she made into marrying into Naomi’s family.

Ruth and Naomi travel back to Judah to live nearly destitute lives, frequently gleaning in the fields of wealthy land owners set aside for the poor. Works in the unseen begin to be revealed when Ruth gleans in the field of Boaz, who was intrigued by the integrity and faith of Ruth after hearing her story.

Through courage and a plan by Naomi Ruth finds herself a potential bride for Boaz. Boaz must follow the order of tradition for seeking Ruth’s hand in marriage from the first in line to be a Kinsman-redeemer, “The nearest living blood relation to a man had certain obligations and offices to discharge, under certain contingencies, in respect of which he received a special name; which is sometimes translated in the Old Testament 'Redeemer,' and sometimes 'Avenger' of blood” (Bible Hub). The first in line passes the torch to Boaz allowing him to marry Ruth. Together they have a son, Obed, who would be the grandfather to King David.

Main Theme and Purpose of Ruth

The main themes and purposes of Ruth’s book and her life are integrity, kindness, and believing God blesses obedience.

Ruth had great integrity. Although she was a Moabite she came under the covering of God when she married into Elimelch’s family. She came to worship the One True God, and she did not abandon God when she was widowed. She took her commitment beyond “until death do us part” in choosing to kindly stay with Naomi. When Naomi encouraged her to return to her father’s home she showed great compassion and courage remarking, “Where you go, I will go, and where you stay, I will stay. Your people will be my people and your God my God.” (Ruth 1:16).

Ruth’s true stance of integrity and kindness followed her to Bethlehem where she and Naomi moved. In fact, her story reached the wealthy landowner, Boaz, and it touched his heart. In their first conversation face to face, he remarked, “may you be richly rewarded by the Lord, the God of Israel, under whose wings you have come to take refuge” (Ruth 2:12). Boaz recognized and praised her great compassion and he looked for a way to help her.

God's faithfulness and the believer's obedience are clear themes in the Book of Ruth. Despite being a Moabite, Ruth came to know and worship the Lord, and she was greatly accepted under His wings. God set things in place so that favor follows her, and she trusts and obeys without knowing the outcome. Ruth obediently follows the direction of Naomi in pursuing Boaz as a spouse. Boaz is also favored in his obedience not to marry Ruth outright but to follow the cultural custom of the Kinsmen-Redeemer. He took the right path to inquire who was first in line to be Kinsman-Redeemer; Boaz trusted God with Ruth's future and his own. After checking with the first in line, Boaz and Ruth were permitted to marry. The Lord blessed their obedience and gave them a son.

The purpose of Ruth also shows that God can use anyone for His purposes and glory. Ruth was a foreign woman, and she would not have been expected to be used by the Lord to further God's plan for the Israelites. But the Lord transformed her heart and blessed her to be in the direct line of Jesus.

What Can We Learn from Ruth Today?

Ruth was a woman of great integrity, even when those around her were in despair or discouraged doing what she knew in her heart to be right. Ruth is proof that kindness is never wasted, not even a little bit. Ruth kindly takes care of her elderly mother-in-law, giving up a comfortable life back home with her father for what at first appeared to be a life of service and poor conditions. God rewarded her, for she sought refuge in Him (Ruth 2:12) believing that He would be with them.

It is also evident in the book of Ruth that God is always working things behind the scenes on our behalf. Romans 8:28 is evident here for all that was meant for harm and dismay of death and destitution was not the final say, God was working things out all along. It was not a coincidence that Ruth ended up gleaning in Boaz’s field specifically, or that her story was carried back over to him to help work in his heart his opinion of the young woman. God was working in the heart of the Kinsman-Redeemer that was first in line to not spark the desire to acquire the lands and widow of the family of Elimelech. The Lord ensured that no obstacle would prohibit the marriage of Ruth and Boaz, though there were ones to navigate.

We can rest assured that even if we cannot see with our own eyes, God is working in situations and hearts to fulfill His plans and those plans include us. He honors integrity and obedience on His time table for perfect timing. We can stand enlightened by Ruth that the very events God blessed long ago can be blessed today in our times.

Our Favorite Verses from Ruth

Ruth 1:16, “But Ruth replied, “Don’t urge me to leave you or to turn back from you. Where you go I will go, and where you stay I will stay. Your people will be my people and your God my God.”

Ruth 2:12, “May the LORD repay you for what you have done. May you be richly rewarded by the LORD, the God of Israel, under whose wings you have come to take refuge.”

Ruth 3:10, “'The LORD bless you, my daughter,' he replied. 'This kindness is greater than that which you showed earlier: You have not run after the younger men, whether rich or poor. And now, my daughter, don’t be afraid. I will do for you all you ask. All the people of my town know that you are a woman of noble character.'”

Ruth 3: 18, “Then Naomi said, “Wait, my daughter, until you find out what happens. For the man will not rest until the matter is settled today.”

Ruth 4: 13-15, “So Boaz took Ruth and she became his wife. When he made love to her, the LORD enabled her to conceive, and she gave birth to a son. The women said to Naomi: ‘Praise be to the LORD, who this day has not left you without a guardian-redeemer. May he become famous throughout Israel! He will renew your life and sustain you in your old age. For your daughter-in-law, who loves you and who is better to you than seven sons, has given him birth.’”

Cally Logan is an author and US History teacher from Richmond, Virginia. In her free time, she enjoys mentoring youth and spending time in nature. Her book, Hang on in There, Girl! Will be available everywhere on April 1, 2022. Check her out on Instagram and Twitter, @CallyLogan and TikTok Cally_Logan.